Broader Impacts* are just as important as Intellectual Merit in the NSF Merit Review process. Dr. Ahna Skop has found a recipe for broader impacts that’s given the public a taste for science. Learn the story of her not-so-secret ingredients.

For Dr. Ahna Skop, the key ingredients in the recipe for good broader impacts are found in a researcher’s personal passions. To many scientists, she observes, broader impacts are activities that are written into a research proposal during the last week before it’s due. “It doesn’t have to be that way,” she says. Instead, researchers can learn to make the connection between their hobbies and their science. “I really want to emphasize that it doesn’t take much to do something. If you have a passion, you can combine it with what you do, your science, and get it out there.” 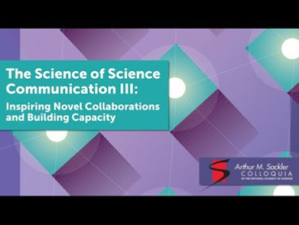 One of Skop’s passions is art, and her hobby is baking. She explains how the two go together in this YouTube video recorded during the Arthur M. Sackler Colloquium titled “The Science of Science Communication III (SSCIII): Inspiring Novel Collaborations and Building Capacity.” The colloquium took place in Washington, D.C. on November 16-17, 2017.

Skop has been the recipient of four NSF awards including three from MCB. Funding for her most recent art installation was included in MCB award #1716298 (Investigating Midbody mRNA Function During Mitosis). The award funded Skop’s research on the portioning of genetic information during cell division. The traveling exhibit, titled “Genetic Reflections,” is expected to open next Spring at the University of Wisconsin-Madison.

*The four components of the broader impacts criterion are: