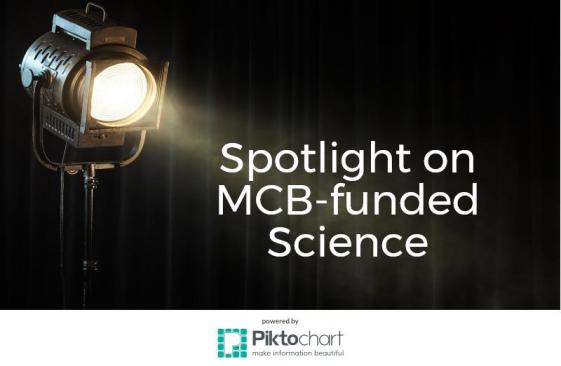 Sharing MCB Science is one of our six blog themes where you can learn about exciting MCB-funded research submitted by our investigators (via this webform). We greatly appreciate the overwhelmingly positive response of the MCB scientific community and have received many more submissions than can be featured in long form on the blog. Enjoy this shorter spotlight of submissions we have received!

Ever wonder how a cell makes a tough decision? When food is scarce, Bacillus subtilis (a common soil bacteria) faces a difficult choice of when to shut down cellular processes and become dormant via sporulation (spore formation). Timing is key: wait too long and die from starvation; sporulate too early and die from crowding by rapidly dividing neighboring bacteria. What serves as the trigger – a specific biochemical signal or a more general physiological response – to enable starvation sensing and sporulation was unknown. As part of a collaborative project, Dr. Oleg Igoshin, an Associate Professor in the Department of Bioengineering at Rice University, Dr. Masaya Fujita, an Associate Professor in the Department of Biology and Biochemistry at the University of Houston, and their research teams applied computational and mathematical tools to this biological question. As described in this publication, they discovered the rate at which the cell grows may serve as a signal of starvation, triggering spore formation. This work could lessen food spoilage and control food-borne pathogens by offering new ways to inhibit sporulation in close relatives of B. subtilis that live on food.

This work is partially funded by the Systems and Synthetic Biology Cluster of the Division of Molecular and Cellular Biosciences, Awards #MCB – 1244135 and #MCB – 1244423.

Diatoms (a unicellular photosynthetic microalgae) are an important part of food webs, especially in areas of the ocean with an abundance of fish frequented by the fishing industry. Because conditions and availability of environmental resources change, diatoms regulate physiological functions (such as the carbon-concentrating mechanisms (CCMs) and photorespiration previously described) at the level of gene expression. Instead of focusing on one environmental condition or type of diatom, Dr. Justin Ashworth (Post-doctoral Fellow),  Dr. Monica Orellana (Principal Scientist) and Dr. Nitin Baliga (Senior Vice President and Director) of the Institute for Systems Biology integrated all publicly available microarray data (displaying gene expression levels) from multiple conditions for the model diatoms Thalassiosira pseudonana and Phaeodactylum tricornutum to look for trends. As described in this publication and in the resulting integrative analysis available online at the Diatom Portal, the research team uncovered common patterns of gene expression and function. They also identified potential cis-regulatory DNA sequence motifs and distinct regions induced in response to changes in ocean pH levels and the availability of nitrate, silicic acid, and carbon. A greater understanding of this fundamental level of regulation enables scientists to better support diatoms in their role as biogeochemical nutrient recyclers.

This work is partially funded by the Cellular Dynamics and Function Cluster of the Division of Molecular and Cellular Biosciences, Award #MCB – 1316206.

As we previously described on the MCB Blog, the laboratory of Dr. Alexander Mankin and Dr. Nora Vázquez-Laslop at the Center for Biomolecular Sciences, University of Illinois – Chicago, studies fundamental mechanisms in protein synthesis. Ribosomes inside the cell read three mRNA nucleotides at a time (a reading frame) during protein synthesis (translation). Sometimes, the ribosome slips one or two nucleotides on the mRNA to a different reading frame (frameshift). Recent work on the E. coli bacterial copper transporter gene (copA) by Drs. Mankin, Vázquez-Laslop, and their research team uncovered a slippery sequence in the mRNA that led to “programmed frameshifts.” Depending on whether or not the ribosome slipped, two different proteins were made – a previously unidentified copper chaperon protein or a copper transporter protein. Together, the copper chaperon and transporter proteins help protect the bacterial cell from internalizing too much copper. This work provides new insight into how bacteria change gene expression in different environmental conditions and offers training for student researchers such as lead author Sezen Meydan, who was highlighted in the ‘Meet the Author’ section of Molecular Cell.

This work is partially funded by the Genetic Mechanisms Cluster of the Division of Molecular and Cellular Biosciences, Awards #MCB – 1244455 and #MCB – 1615851.