Broader Impacts (BIs) are the contributions to society and advancement of scientific knowledge that result from research. As we previously noted on the MCB blog in this infographic, there are many different ways science can have broader impacts. The BI activities and outcomes spotlighted in this post were submitted by MCB-funded researchers as examples of what they have accomplished with MCB support, not prescriptions for success during the merit review process. If you are: 1) an MCB-funded researcher and 2) would like to share your broader impacts activities with our readers, please fill out this form to be considered in a future post. 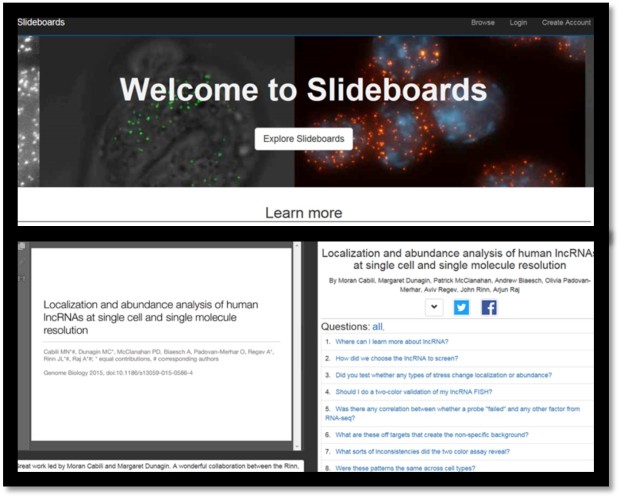 Slideboard website homepage (top) and an example slideboard with title page and Q & A (bottom), which are available at http://slideboard.herokuapp.com/.

Once a scientist makes a discovery, it is off to the presses to publish. The resulting journal article can be lengthy and filled with jargon, because it serves as a how-to guide for other scientists in the field to repeat experiments. Though very informative to experts, scientific publications can be challenging for students and the general public to read quickly and understand. Dr. Arjun Raj, MCB CAREER recipient and Associate Professor of Bioengineering at the University of Pennsylvania, and his research team came up with a new way to communicate science called “Slideboards.” As shown at the bottom of the image, slideboards contain the title, citation, and authors of journal articles, followed by lists of frequently-asked questions with in-line answers. Teams of graduate and high-school students generate each slideboard by asking and answering their own questions about the paper. Online readers can use a form at the bottom of the slideboard to submit their own questions, which are answered by the students. Creating a slideboard allows the team to practice using web-based technology, and translating complex scientific literature into a summarized question-based format. This outreach project also helped graduate students develop skills necessary to present their own research, while encouraging high-school students to learn about scientific projects at the leading edge of the field. To view the Slideboard website, go to http://slideboard.herokuapp.com/.

This work is partially funded by the Cellular Dynamics and Function Cluster of the Division of Molecular and Cellular Biosciences, Awards #MCB – 1350601. 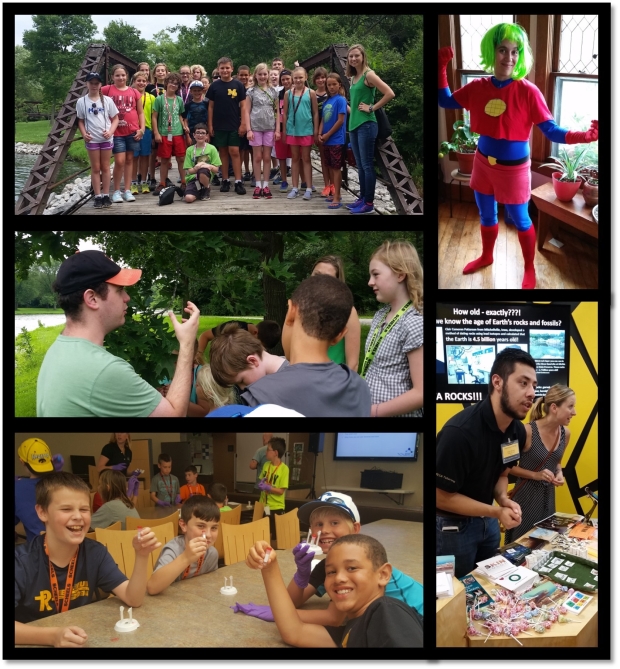 As you look around the sidelines at a sporting event, you may notice a group of parents enthusiastically raising funds for new team uniforms or sporting equipment (booster club). Taking that concept out of the world of sports and into the world of science, Dr. Maurine Neiman (Associate Professor of Biology at the University of Iowa) and Dr. Emily Schoerning (Director of Research and Community Organizing at the National Center for Science Education) teamed up with students at the University of Iowa to create a Science Booster Club. The Science Booster Club held a summer camp (images on the left) and participated in community-organized events such as the Iowa State Fair (images on the right). At each event, club members facilitated fun, interactive science activities and discussions with the public. The group also raised funds to purchase and donate equipment to local science teachers. Young people attending these events, often from underserved areas that lacked scientific resources, have the chance to see themselves as scientists by learning through a hands-on approach. Graduate and undergraduate booster club members also gained valuable grant writing and proposal review, outreach, communication, education, and event planning experience – skills that are useful in future professional scientific careers. As such, for his work in the science booster club, graduate student Kyle McElroy received a 2017 summer stipend from MCB’s NSF 16-067 supplement to improve graduate student preparedness for entering the workforce. Dr. Schoerning noted, “We worked with over 54,000 Iowans last year during this pilot project at the University of Iowa, and have expanded into a national program in 11 states.” Click here to learn more about the Science Booster Club at the University of Iowa.

This work is partially funded by the Genetic Mechanisms Cluster of the Division of Molecular and Cellular Biosciences, Awards #MCB – 1122176.